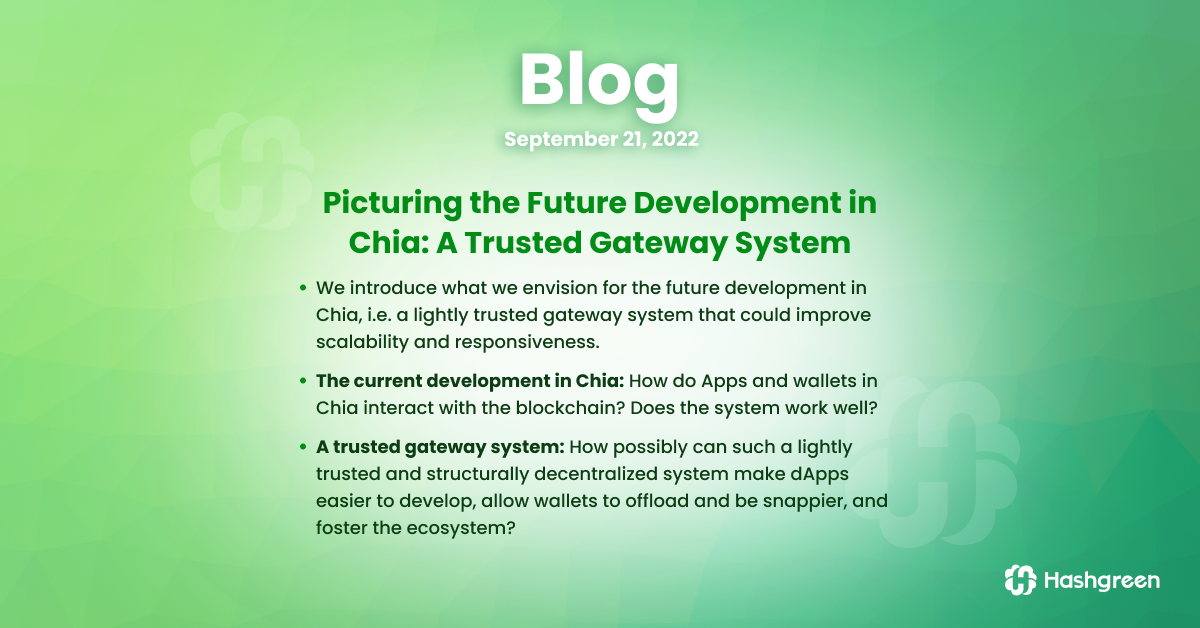 Hello friends and fellows of Chia, welcome back to another post from Hashgreen! It's been a while since we had an update. Please forgive us for not having as many updates recently, as the development of Hashgreen DEX has come to the point where we think current features should suffice for over-the-counter (OTC) trading purposes. What follows consecutively is the development of the first ever AMM in Chia that is currently underway. We believe the ability to trade at will independently from counter-parties is a critical primitive of on-chain decentralized finance.

In today's blog, looking back from the experience of launching Hashgreen DEX to the construction of AMM, we are going to walk you through the landscape of the existing development in Chia and introduce an easier development in which the services could function in a more responsive and scalable manner to meet the needs of both end users and developers.

The current development in Chia​

There are many existing dApps around the concept of a peer-to-peer trading protocol called “Offers” now. While it is decentralized and secure, the wallet is responsible for, other than just storing your private keys securely, managing these transactions/trades against peers and tracking their statuses on the blockchain by continuously pulling data from full nodes and verifying them.

Below is a figure showing the general picture of the system design that are commonly seen in Chia:

Figure: The current development in Chia. 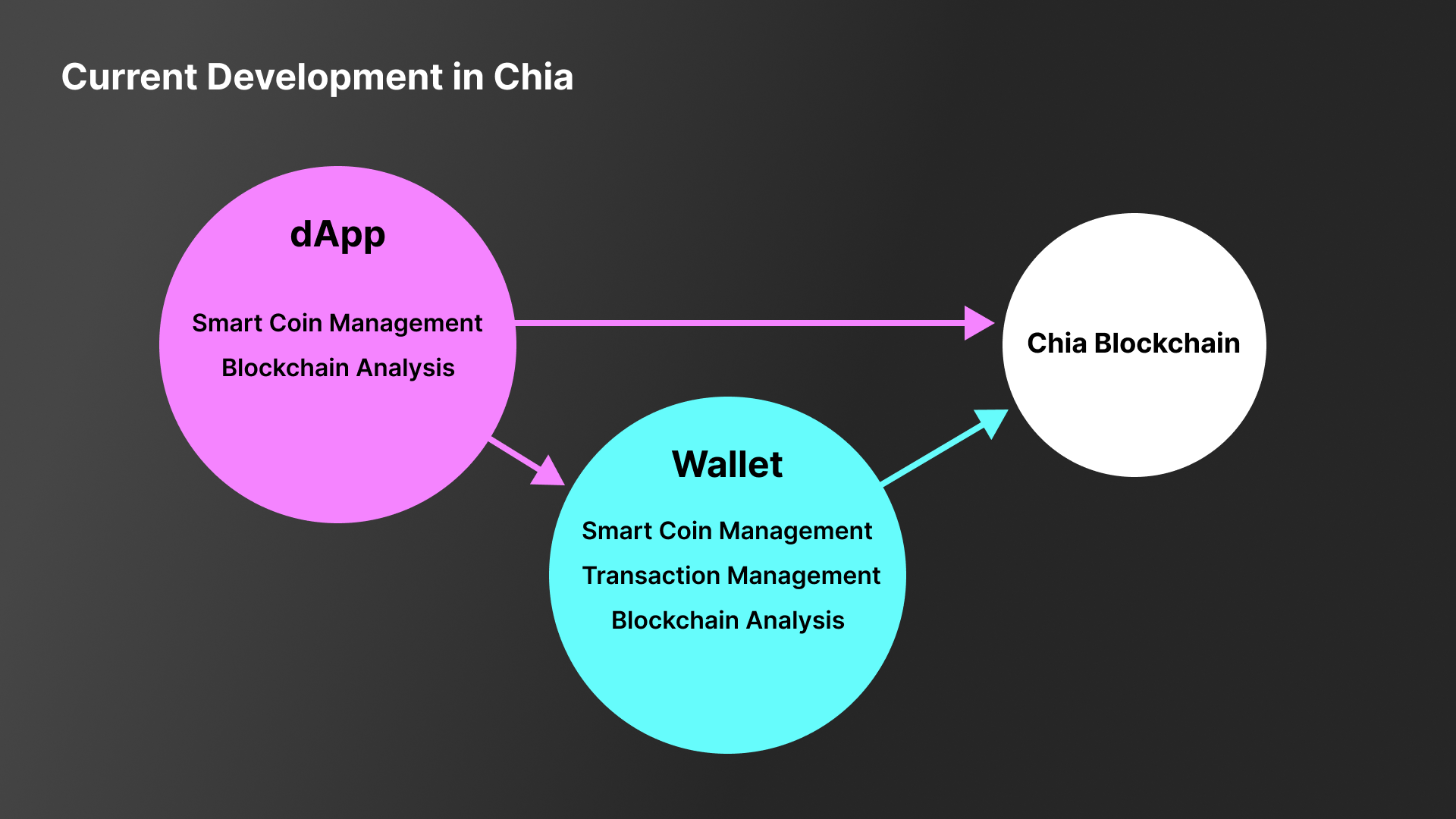 The system, at a brief glance, looks reasonable and works reasonably well: dApps and wallets independently communicate and interact with the blockchain, processing users' transaction requests. Together they support an array of functionalities, including but are not limited to smart contract ("smart coins" in Chia's case) management, transaction activity management, and analyses of the blockchain. Smart coin management ensures the states in which users are trying to change are up to date on the blockchain and hence the transactions are valid when submitted; activity management and chain analysis are means to ensure, while complicated operations are behind the scenes, users can rest assured and observe high-level abstraction of their own activities as seen below. 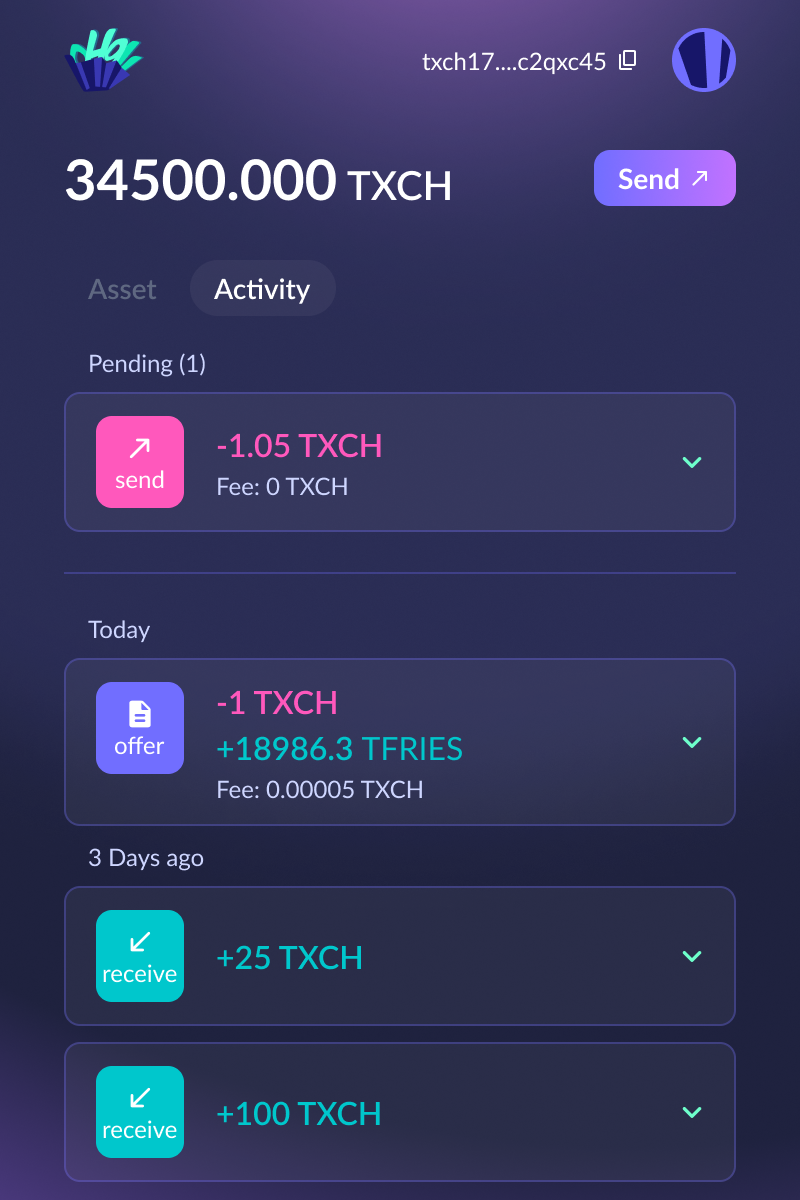 Yet, current dApps (and other dApps on the way) are replicating an overlapping set of logic with the wallet underneath, performing smart coin management and blockchain analysis parallel to the wallet. In a simpler sense, dApps have to spend resources to set up their infrastructure (i.e. Chia full nodes) to deal with the abundance of activities on-chain. This creates two problems:

We have not even mentioned that current Chia wallets (including official PC wallets and browser extension wallets) have spent so much effort dissecting the whole blockchain simply to locate your transaction in the ocean of activities. This burns away much computational power and energy from your computer, and it bears asking if we can find a better design that hits two birds with one stone—making dApps easier to develop and allowing wallet to offload most of the heavy lifting.

Web3 does not have to be inefficient​

dApps or wallets do not necessarily have to deal with all the nuisances. We can build a supporting system for web3 projects to allow them to read from and write to the blockchain with APIs (application programming interface). The idea is that blockchain in itself does not require everyone to trustlessly maintain a replica of the chain, but rather, one should be able to fetch and verify any piece of information from the chain. With that in mind, users on the edge can save their precious computation power and device pattern if they choose so, accessing the web3 world through this supporting system.

Let me explain to you why and how exactly does having such a service, or a trusted gateway system to the blockchain, could improve the scalability of the system and thus provide a real-time experience to the end users.

A lightly trusted gateway to the blockchain​

Figure: What the development would look like if we apply the gateway system. 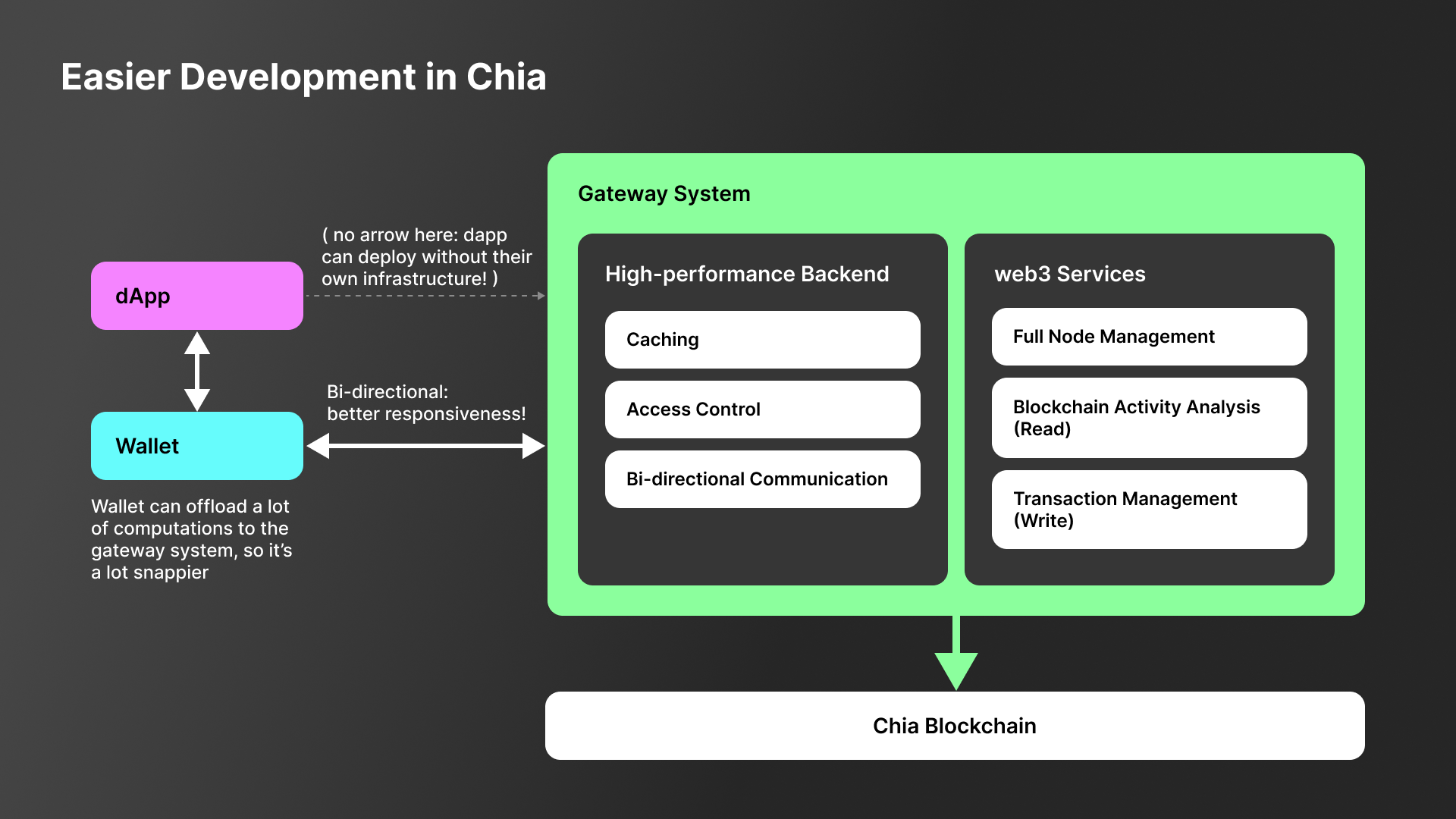 A trusted gateway system to the blockchain is structurally decentralized in its backend and it provides endpoints users can call to execute their web3 business via APIs. It interacts with the blockchain, as well as the dApps and wallets. This system will focus on solving these problems:

The gateway system to the blockchain could be beneficial to the users and the developers for it could enhance the scalability and responsiveness of the system. It will achieve a greater level of convenience if the demand and usage of dApps in Chia grow higher. But the challenge for the system would be to earn trust from the users and other developers in the defi world.

The aforementioned gateway system is just an idea that we envision and below are some more of the functionalities we can think of that also serve well:

We talked about the current development in Chia and painted a picture of an easier development in which responsiveness and scalability are achieved via a lightly trusted gateway system. We believe that such a gateway system could be favorable to the users and developers, and maybe you have a better idea to foster the ecosystem!