Hashgreen successfully released a decentralized exchange on Jan 12, 2022, in a joint live event with Chia Network. If you were not at the event with us, here is a clip of the presentation on the Hashgreen Decentralized Exchange (DEX).

Chia Blockchain introduced its first on-chain atomic token swap standard, powered by the underlying smart coin language Chialisp. Using this standard, users can start exchanging tokens on the chain, including the Chia (XCH) token and other Chia Asset Tokens (CATs). This functionality opens a lot of possibilities on the blockchain, including the first batch of dApps, with Hashgreen DEX being one of them.

We at Hashgreen have been working hard for months to develop the project and integrate our interface into the official Chia wallet. After the successful launch, we received many questions on how and why we decided to build Hashgreen DEX this way.

In today's post, we want to take you through a journey - a journey on Chia's most basic technical building blocks, how and why we crafted the first DEX on the Chia Blockchain, and finally, how we envision DeFi will look like on Chia.

Let's not pretend this has never happened. You opened up your Chia wallet, trying to exchange some Chia (XCH) for some Stably USD (USDS) on the Hashgreen DEX. This popped out, saying you have a lot less spendable balance than you have total balance... 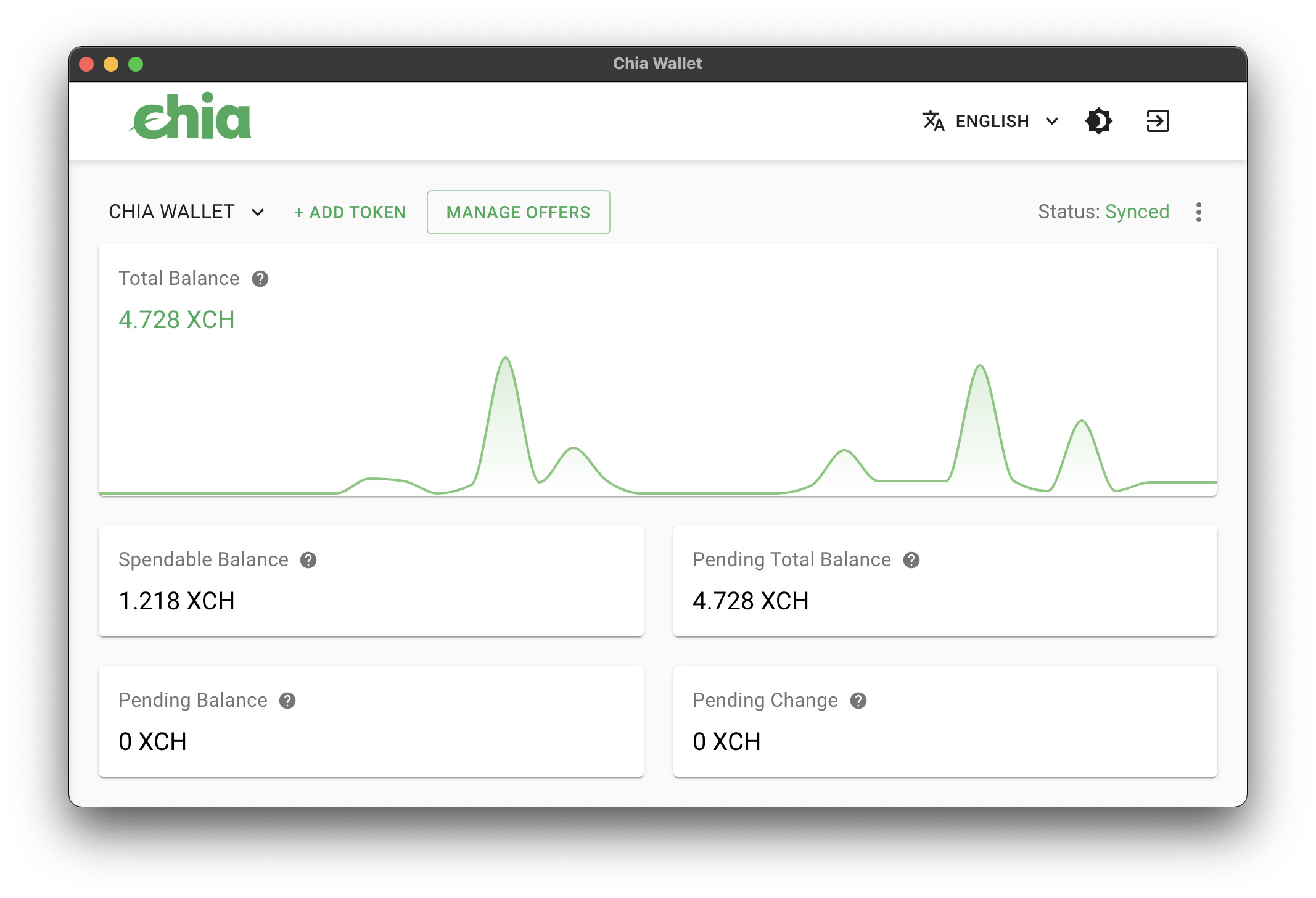 ...what happened! If I have all the XCH, why am I unable to send them all, or make an offer out of it? Well, UTXO is the main culprit here.

Short for unspent transaction outputs, this is nothing new and was introduced by Bitcoin. Instead of having a balance sheet for every user on the blockchain, Chia tracks your funds using UTXOs (or, rather, coin set to be more accurate), which is a technically fancy way of referring to coins. Coins have predefined ways to be spent, and are capable of producing coin outputs when they are spent. Moreover, any given coin is only ever created once and spent once -- and that's it! This philosophy focuses on tracking the change of state on the blockchain as opposed to recording the whole state.

You can easily track how many coins are created in the blockchain using explorers.

The choice of using UTXOs on Chia leads to many interesting and advantageous properties:

It is estimated that over $576M MEV, as of the time of writing, has been extracted from Ethereum.

With these seemingly wonderful advantages, it sounds like a no-brainer that every chain should adopt this model as opposed to the account model. Apparently there are some trade-offs; trade-offs that takes additional effort to mitigate but are definitely worth it.

Let's hop back onto our spendable balance problem.

When we make transactions, we are in fact spending a coin or coins that might sum up to more than what we try to send. For example, imagine you are a lucky farmer who farmed a 1.75 XCH coin and wish to send 0.1 XCH to your friend to let them HODL. When you send the XCH, you are actually destroying the initial 1.75 XCH coin, creating a 0.1 XCH for your friend, and sending the rest 1.65 XCH back to yourself. During the wait for the change coin to come back, your funds are effectively reduced, and that is why the Chia wallet shows a lower spendable balance as you cannot double-spend a coin.

Offers are more or less the same: as you create offers to exchange your tokens, you do not want to accidentally spend your coins and invalidate the offer. The Chia wallet was kind enough to soft-lock the coin so that it cannot be used, until you either cancel the offer or when the offer has been fulfilled.

The UTXO model, while having a significantly smaller attack surface than that of the account model, is trickier for protocol design. If you still remember, transactions in the same block are spent simultaneously and every coin is only spent exactly once. This implies that if we want to build a more advanced application, we have to design while keeping the ability to perform multiple interactions in mind. Take a very basic application for example - an automated market maker (AMM).

The most renowned instance of an AMM is Uniswap where swappers would exchange their assets with a liquidity pool at a market price determined by the amount of assets held in the pool. When Uniswap contracts are executed, they run sequentially, creating an interaction between the swapper and the pool each time. Yet on the Chia Blockchain, we cannot naively queue up user exchange requests sequentially, since there is only one pool with one coin present. This produces several challenges: For example, exchange operations would need to be aggregated somehow to interact with the pool together. Furthermore, we need to ensure price fairness, resist against denial of service attacks, and overcome many other problems!

There are many proposed solutions on other UTXO-based blockchains, and for the sake of brevity, we will include the discussion in future posts.

In short, clever design choices have to be made for dApps, but when smart contracts are carefully crafted, UTXO-based blockchains have better security guarantees and efficiency.

Bitcoin was successful, but as a store of value, not as a successful technological demonstration. Bram Cohen himself wrote about how Chia's technical motivation stemmed from Bitcoin, and as a last-mover, Chia was able to get things right the first try.

On day one, Chia shipped with the full capability to process smart contracts (or, smart coins, to be more accurate). The on-chain language, chialisp, powers many existing features such as singleton, Chia Asset Token (CAT), and even offers. The programs for smart coins themselves were not actually stored on-chain, but rather, its Merkle root hash is. One does not have to reveal the program until the coins are spent, thus greatly reducing the attack surface. These smart coin primitives are also extremely composable, giving developers building blocks for their decentralized applications.

To date, there is a prosperous community around CATs -- project developers issuing their own tokens and project followers HODLing and trading. We at Hashgreen believe there are more exciting things to come in the Chia ecosystem, but first, let us take a look at how we built the Hashgreen DEX and why it is designed in this way.

Chia wrote an in-depth analysis about how offers work technologically and how they can be used in dApps. In case you have not read it, here's a quick summary:

Offers are serialized off-chain commitments to swap coins for coins. Anyone can take that file and complete the other side of the swap, sending it to the blockchain to settle. Without the other half of the trade, no one would be able to spend your coins or steal your funds.

It is intuitive that, you can send your offer files around in channels like Keybase and Discord, yet you will soon realize -- the prices you get are nowhere close to optimal. Liquidity is plain disastrous with vanilla peer-to-peer trading, and this is the main push for more advanced dApps. Some examples are OfferBin and OfferPool which provide offer upload, sorting, and download services. They operate just like Craigslist: users are responsible for submitting the offers, and pushing aggregated offers to full nodes on their own.

Interestingly, Hashgreen did consider this solution, and we observed several potential problems with this Craigslist approach and ultimately went with our current DEX approach.

Admittedly, several aspects need to be discussed in-depth about the DEX working principles, and we will briefly mention them here.

Working on the Chia Blockchain certainly brings many unique challenges to the Hashgreen team, and we want to tell you that this MIT-based team is not afraid of challenges!

Along the way, we have heard of perspectives on Chia's development purely based on its price, but this is simply an unhealthy view on a tech-heavy project. Being one of the first developers on Chia, we are journeying through its infancy as well as you are, and enabling more and more applications on our way. At any given point in time, we might find ourselves having to make trade-offs in either protocol design or system deployment, but rest assured that we take a first principled approach with the user's best interest at top priority. In order for us to communicate these complex ideas with you, we are starting this blog to periodically fill you in with more development progress and technological insights for the Chia Blockchain.

If you have more questions, you can refer to the FAQs or follow us on social media (Discord and Twitter). Thanks for staying with us!